This is a photo of someone who has just finished doing pull ups at my gym. 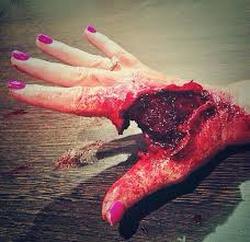 Ok. So that's not true.
​
What is true is that torn hands, despite their popularity as a rite of passage or demonstration of toughness or exertion in Facebook posts are actually an indication of a lack of skill or preparation or execution or some combination of the three.

It seems like every CrossFitter starts out by trying to terrify their friends with photos of blisters and busted calluses. This vexes me and gives cause for the first of many posts in which I will angrily vent about elements of CrossFit and the health and fitness industry at large that displease me. By doing so I hope I'll dispel some of the rumors, lies and myths perpetuated to advance the agenda of parties with self interest or are actively preventing those who would otherwise involve themselves in healthy pursuits to remain on the sidelines.

​Here's a more likely scenario than the photo above depicts that can be found on most CrossFit gym's Facebook pages.

​These hands have had their calluses ripped off. Pull ups are the most common culprit and will receive the lion's share of my ire.

There are many things wrong with these hands that are entirely avoidable with some basic knowledge.
​ 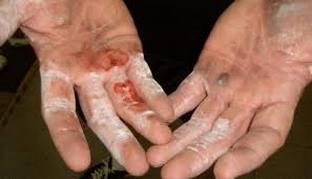 ​How do I despise thee? Let me count the ways:

1) You shouldn't have calluses. No one wants you to have calluses. Your partner doesn't want to be caressed by those hands. Your child experiences scant comfort as your Freddy Krueger hams paw away the tears from their face. Even your mechanic is likely to think "That's a disgracefully grody set of mitts you're sporting, Missus. Have you not heard of Olay?"
After your workout, regularly as clockwork, take a Dremel, razor blade or pumice stone or whatever mechanism you favor and remove those things before applying some hand lotion. Healthy hand skin is soft, pliable, hydrated and alive rather than two tough-looking plates of stinky digits with bold protuberances between each joint.

2) Unless you're a forensic expert at the murder scene of a cocaine dealer your hands should not be coated in blood and white powder. Chalk is used to create static, not dynamic, friction. It is however abused more than the aforementioned narcotic despite the requirement for a bar or kettlebell to spin in the hands. Even if your hands have survived the expected repercussions of the gym owner as you do your favorite LeBron impersonation and cover their freshly cleaned floor with magnesium carbonate, they are unlikely to be able to handle the friction inherent to the combination of iron, sweat and chalk which creates a file and glue double-act that destroys hands with the efficiency of a belt sander.

3) There should be no relative motion twixt hand and bar in a pull up. The thumb should be used in opposition (allowing more recruitment from the lats) and the shoulder should be flexible enough to create room for the kip while winding up elastic tension for re-release into the backswing phase of a kipping pullup. If your hand rotates then you may well need to work on your shoulder flexibility. Your overhead position could probably use the help also.

4) Posting pictures of your injuries comes a close second in lack of sensibilities to inviting your friends over to eat the placenta following the birth of your latest challenge to the success of the human genome.

I understand the narcissistic desire to share your proud agony with the rest of the world. I do. Really. I've been there. Unfortunately, it comes across to those in my professional network as an advertisement that a) I can't get people who come to my gym to follow my advice or b) they're following my advice and my advice is worthless.

Here's my advice for clarity; fitness is like a sun tan. It comes through exposure. If you're at home facebooking the world about your hand condition then you're not going to be able to work out tomorrow. That means you won't be able to stimulate adaptation. That means you won't increase your capacities. So, everyone else is getting fitter while you bask in your heroic glow because you busted your hands instead of stopping to prevent an injury. It takes maturity. It takes nouse. It results in fitness and health instead of looking like you just jacked off a dragon.

Look after your hands. It pisses me off when you don't.